…that will keep my mind off the heavy decision-making that’s going on.  If you really want a yummy meal, try this one:

I used two boneless pork loins, rather than the pork shoulder (called Boston Butt.) I wanted this barbecue cooked low and slow, and that means long. My husband sliced two medium onions into rings, and we laid half on the bottom of the cooker. Add some minced garlic. Salt and pepper the pork using the ‘shower method.’  Lay the two roasts on top of this and add the remainder of the onions. Then – get this – pour a bottle [16 oz.] of Coke or Pepsi over it all! Put the lid on and set the cooker to high. Leave it at that temperature for four hours. Turn it to low, and cook for an additional four to five hours. We did this part on Sunday so we’d have time for the long cooking process.

Once it cooled a bit, my husband helped me to shred it [pulled pork] with forks. All the shreds went into a large plastic container and into the refrigerator. On Monday morning, we put the shredded pork back into a clean slow cooker and added enough barbecue sauce just to coat all of the meat, but not have it soaking in sauce. We left it on low for several hours. I’m telling you, it was delicious. We got bakery rolls for it, and seconds were requested! 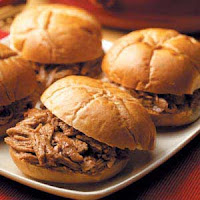 I also made my potato salad: three pounds of small red potatoes were boiled for forty minutes. The water should be heavily salted to penetrate the potato skins. Remove and cool. Add two celery stalks, minced, and a half cup of minced onion. Pour in about a half cup of white vinegar. Stir in two tablespoons of yellow mustard, and several tablespoons of real mayo [I use Hellman’s] to taste. Sprinkle with celery seed and mix everything well. This tastes so much better when made the day before (which I did!) Everyone has their own potato salad recipes, and this is mine.

I made a crunchy Asian salad also. Slice a large Napa cabbage into half-inch segments and place in a large bowl. If you want, add five green onions [scallions] sliced finely. The dressing is a half cup of rice wine vinegar, a cup of vegetable oil, a quarter cup soy sauce, and a half cup of sugar. Mix this really well. In a frying pan, melt a stick of butter. Crumble up two packages of ramen needles (don’t add the flavor packs.) Add the crumbles with four ounces of sunflower seeds, and a small envelope of sliced almonds. Let the mixture turn golden brown and drain on paper towels. Before serving, mix the salad, dressing, and crunches together. It’s a great side dish. 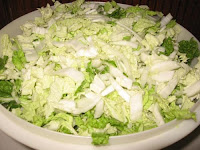 That’s it for the cooking lesson. When the weather cools, I want to get back to baking. Today, it’s going into the 90s – again. I’m going to brave it, though, so I can get my hair done. I’ll probably pay dearly for the heat exposure, but I’m tired of cancelling appointments.