Plans Change: It’s a good thing that I’m pretty flexible because changes happen in minutes around here! My SIL drove my little guy here after the Kindergarten orientation on Wednesday night. When they arrived, little guy was so talkative, telling me all about his teacher, the classroom, the kids, the playground, and his supplies. He was so happy and excited. Then his dad took him to bed, and all hell broke loose. He started with the tears, saying he needed his daddy to stay over with him. I tried in vain to console him, but nothing either of us said was of any good. When my husband came home, he tried, also, but to no avail. Finally, my SIL lay down with him, and the little guy fell asleep. I was nervous that he might awaken and start again, but he went through the night with no further incidents. I just don’t know what’s bringing on these bouts. 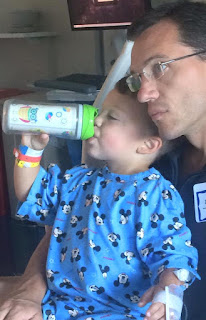 The younger one got through the tonsillectomy just fine, and the doctor also inserted new ear tubes. We did a lot of Facetime and it was amazing how well he was. He even ate grilled cheese, crackers, and cake. The doctor said he was well enough to go home last night, and my little guy here decided he would go home, too.  So, my daughter drove up, we packed his things, and off they went. Now, I’m having a quiet morning.

Active: I thought the little guy would be tired yesterday, but he had plenty of energy. After a huge breakfast, he wanted to paint. So, I got his supplies ready, and I let him paint an old candle I had. He kept at it for quite some time, happy as a lark. Then he wanted a snack [pretzels] and TV [Handy Manny.] We went to the den, which I was trying to avoid, so he could watch two videos on the computer. By then, it was lunch time, and he helped me fix it. Afterwards, he built with his blocks, colored, cut, created, and had another snack. The time flew, and my husband arrived, ready for dinner. It was at that point when plans changed, and by 7:30, he was gone! It was a busy, but fun-filled day, and I wasn’t even tired! 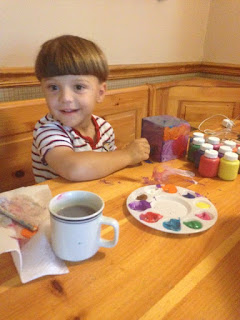 Celebrating: Today is our anniversary [won’t say which one – I feel old!] and we’re celebrating quietly. DH wants to go out for dinner, but I prefer staying home where I’ll be comfy. We just exchange cards [I made the one I gave him] and we forego presents – we’re gifts to each other.

Block Party: One of our neighbors stopped by to ask if we’d join in on a Halloween block party. We said yes, and I’ll wait until then to see how I feel. I said I’d make a dessert and have treats for trick-or-treaters. We don’t see enough of the people on our little street, and this will be a nice way to meet and greet.

Books: I haven’t finished The Color of Light, but I’m really enjoying it. The library didn’t get any of my books in this week, so I’m stretching this one out. I always need something to read or I go nuts.

Well, that’s all I have for now. Have a great weekend.