Here are my boys reaching the summit of Mt. Rainier. They’re so bundled up, you’d think it was winter! I wish I could borrow some of that cool air. 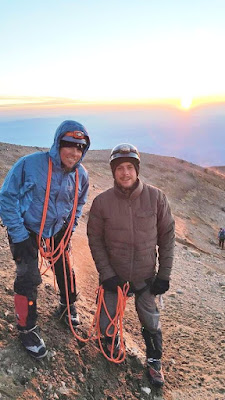 I’m making Italian food tonight – pasta bake with sausage and homemade sauce. When my daughter brought us all those veggies on Monday, I have to find ways to use them. There are four zucchinis, all of which are large. She said these were the smaller ones! I’ll give two to the boys, and I’ll make more bread to freeze. I read an article that said you could freeze them, but not whole. So, I’ll try something new and slice them then freeze them. I’ll make zucchini chips with them when they thaw. 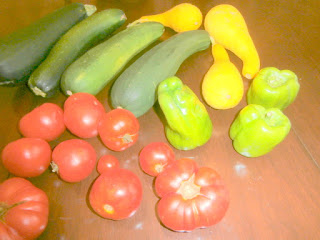 I don’t eat peppers, but my husband loves them. I’ll keep one in the fridge for his omelets and salads, and then I’ll slice and freeze the rest. There are three yellow squash, and I’ll use them in a casserole tomorrow.  If I save some pasta and sauce from tonight, I’ll have a yummy dinner. Then there are the tomatoes. I can’t use all of them for just us, so I’m trying something else new.

I’ve never made sauce from fresh tomatoes, and I’m giving it a go. First, I’ll boil some water and have a bowl of ice water next to the stove. After removing the stems, I’ll cut a small X on the bottom.  They get put into the boiling water for thirty seconds, and then I put them in the ice water for five minutes. The peel should come off easily. Then I’ll mash them with a potato masher and put them into the slow cooker. I’ll add the other ingredients and it should be sauce in a few hours. Nothing like a new project to keep me motivated.

On a side note, I slept in the family room last night – or tried to anyway. I didn’t want to aggravate my sore side, and going up the stairs would have done that. Unfortunately, I didn’t get a lot of sleep. I couldn’t get comfortable, and I kept waking up. I gave up at 5:30, and just sat. I’ll take a nap this afternoon, and I’ll go to bed early. I found out the hard way that I don’t do sleep deprivation well. On a better note, though, my side is almost completely healed.