After yesterday’s weird occurrence, I’m trying to write another post. I’ll keep saving it so I won’t lose it again!

Anyway, I started by saying that we have a new fur baby in the family. The background goes like this. When my daughter first met her husband, he had a little boy Husky named Doc. She, in turn, had a gigantic, part-Pyrenees pup named Bailey. Poor Bailey had had some abuse issues in his early life, and the shelter took him in before he was even weaned. Naturally, that’s the one my daughter wanted. He was afraid of everything, and he’d hide and shiver whenever he was frightened. Doc was very kind to him, but the poor pup was a basket case.

Then the human baby arrived, and the two dogs were introduced to him. Doc took to the addition well, and he took on the role of protector. No one could get to that baby without going through Doc. It was very sweet to watch. On the other hand, Bailey wanted nothing to do with the baby, and he even seemed frightened. When the baby was four months old, Bailey snapped at the baby. My daughter reprimanded him, but he did it again a week later. She quarantined the dog to the basement while she contacted the rescue shelter from whom she adopted him. They suggested a relocation with a family who had no or grown children. The tearful exchange was made, and his new family sends pictures of him regularly.

In the meantime, Doc was getting older and developing arthritis along with other health issues. He didn’t enjoy playing anymore and preferred to separate himself. The family decided a new puppy might help, and little mixed-breed Cinnamon joined the clan in ’13. Doc only took a slight interest in the new pup, and he continued to go downhill. He passed over the Rainbow Bridge last September when he was thirteen years old. It was a sad parting, but little Cinnamon did his best to get the family out of their grief.

Again, wanting to be a two-dog family, my daughter began looking into rescues and shelters for the right match. They got a call last Sunday, that a little four-month-old Husky had been brought in, and they needed an adoption quickly. The little family took a trip up to Matawan, NJ, along with little Cinnamon to check out compatibility. It seemed to be a perfect match for all of them, and off they went with the new little boy.

They stopped here on the way home, and, of course, I immediately fell in love with the little puff ball. He has different coloring than Doc, which is good, as there won’t be constant comparisons. This one has more tan in his coat than the usual black and gray. However, he has the bluest eyes which are so captivating. He hops around, wagging his tail, and is very pleasant. As of Sunday, he had no name. I voted for Nutmeg, but I rarely win those competitions. 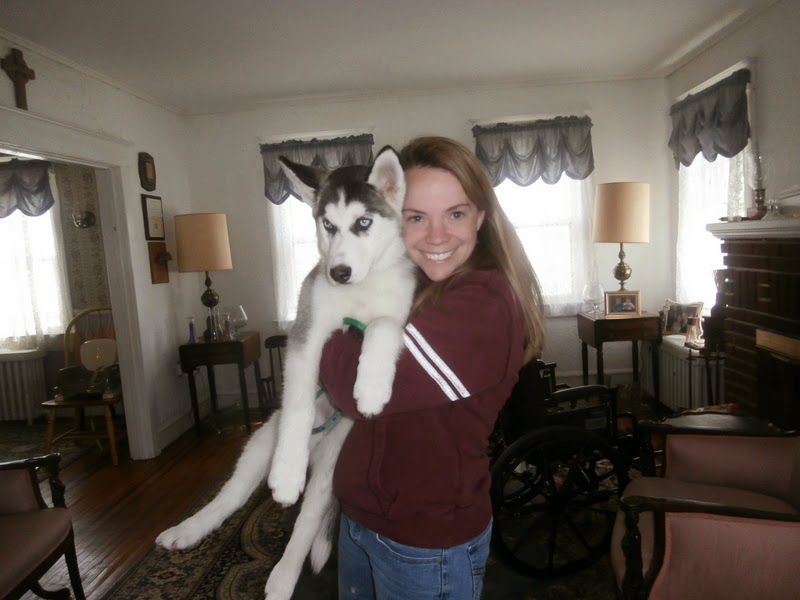 I hope this new pup and Cinnamon get along well and that the little guys will get great joy from their new “little brother!” I know I will!